Roses delivery in the Philippines

Roses are a traditional elegant and romantic symbol throughout the world for more than 2,000 years. Their great aroma, fascinating form and colours serve great as decoration or a demonstration of affection.

Roses are used to send a silent message of love and passion. The ancient Greeks and Romans associated the flower with Aphrodite and Venus, goddesses of love. They also represent confidentiality, as in the Roman empire a rose would be placed in the door of a room where confidential matters were conducted. This also gave origin to the Latin expression “sub rosa”, literally “under the rose”, which means something told under secrecy.

There are a few rules which you should pay attention to when sending flowers to someone else. Sending a bouquet of red roses for a spouse in your anniversary is a kind romantic gesture. Sending the same bouquet to your colleague or roommate will feel weird. Instead, try to use white or yellow roses for friends.

Roses can also be sent to people who are away from you as a birthday gift, or other special occasion. At Flower Delivery Philippines we specialise in roses delivery in the Philippines, either in Metro Manila and Greater Metro Manila areas.

Meaning of the Colours

Although roses are commonly recognised as love and passion, artists have used roses in their work with different meanings. In the classic “The Little Prince” by Antoine de Saint-Exupéry, the story is about a pilot that after becoming stranded in a desert, encounters a prince which fell to Earth from a tiny asteroid. One of the most known illustrations of the book shows the prince in a field of a thousand roses, which represent all the friendships, choices and loves that he had left behind.

The classic “Alice in Wonderland” also feature roses. This time the difference between white and red roses. The cards who painted the roses white, instead of red, fear for the Queen of Hearts, which only likes red roses. It’s a symbolism for Alice’s transition from purity and innocence to adulthood.

“How did it happen that their lips came together? How does it happen that birds sing, that snow melts, that the rose unfolds, that the dawn whitens behind the stark shapes of trees on the quivering summit of the hill? A kiss, and all was said.” – Victor Hugo

“Life is a rose; beware of the thorns.” – Proverb

“Beauty without virtue is like a rose without scent.” – Proverb

“True friendship is like a rose. We can't realize it's beauty until it fades.” – Proverb

High Quality Roses from the Philippines

The Philippines are one of the top roses producers in the world, accounting also for a great volume of fresh cut roses, exports to the entire world, especially to Southeast Asia. The climate of the Philippines is ideal for cut flowers production all-year round. Check out our varied roses selection as well as other fresh cut flowers from the Philippines.

Roses Delivery in the Philippines

Flower Delivery Philippines delivers roses bouquets in the Philippines according to your specifications. Our online store allows you to customise your order choosing the quantity and color of the roses. You may also include chocolates, a teddy bear, a cake and many more gifts to your order. 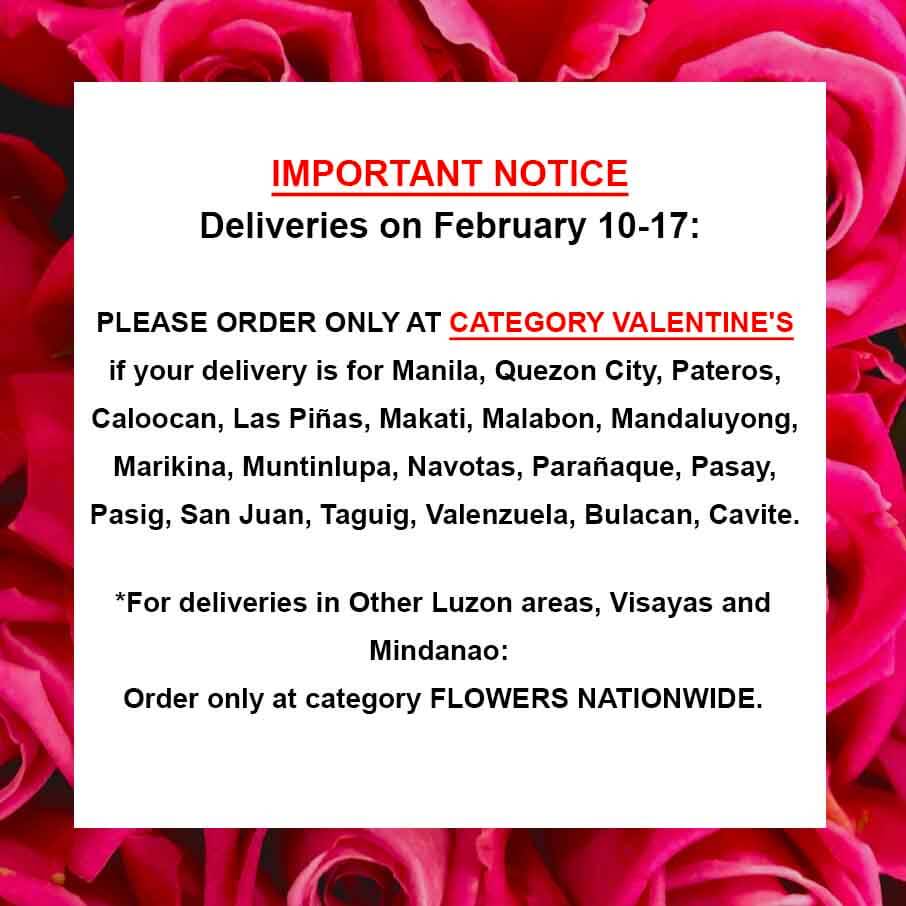